The Wolf Butte Lutheran Church is in a remote part of Adams County, North Dakota, about 45 miles south of Dickinson. It was once part of a Lutheran Parish that also included another abandoned church we’ve photographed, the North Grand Lutheran Church, south of Bucyrus. Regular services ended at the Wolf Butte location in 1988. 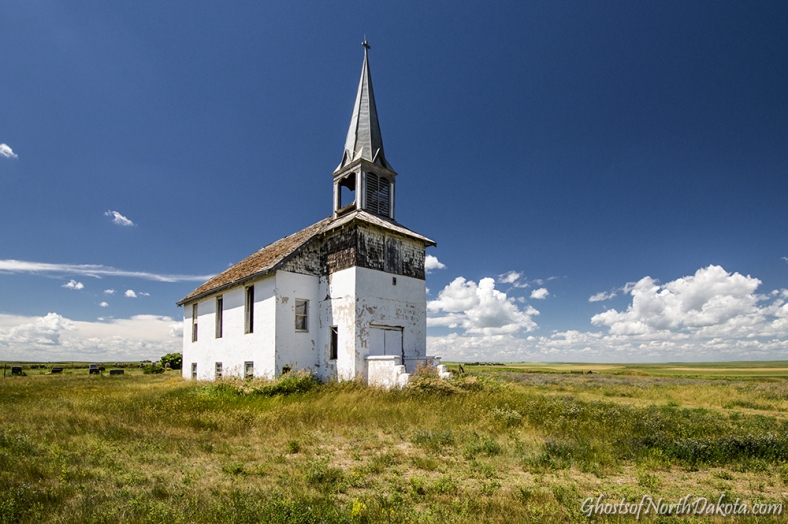 The Wolf Butte church was unusual for its finish. The exterior appeared to be stucco, or some other kind of applied finish over a wood frame, with cedar shakes covering the upper portion. The bell had been removed from the steeple. 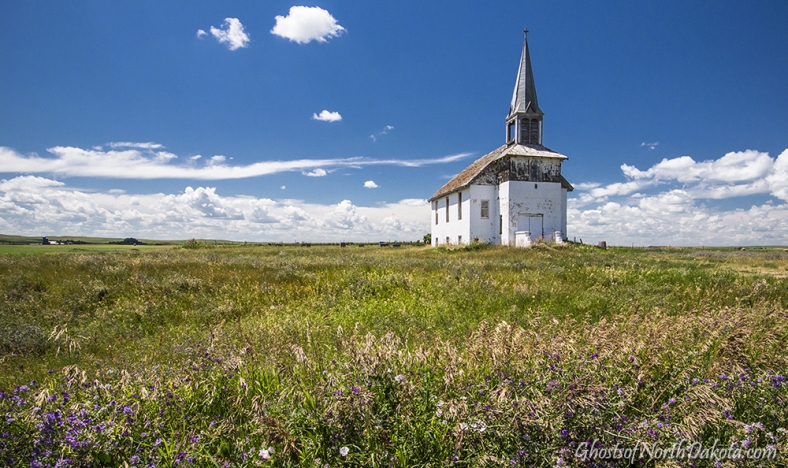 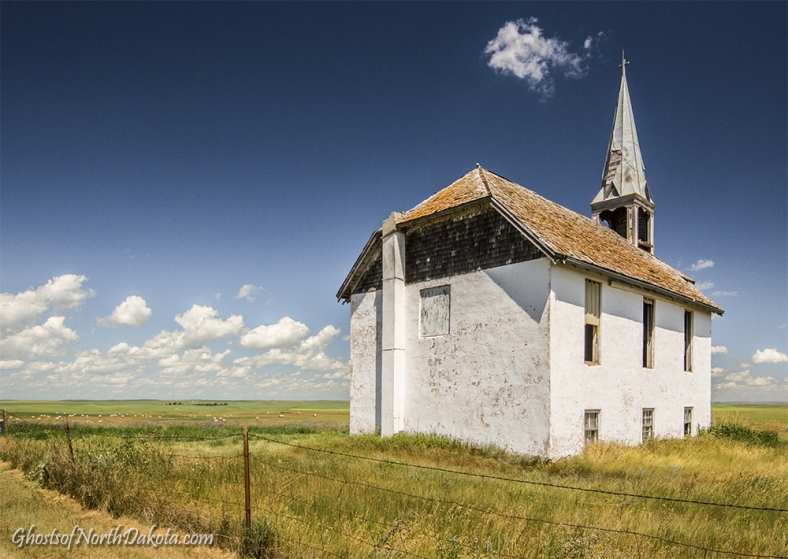 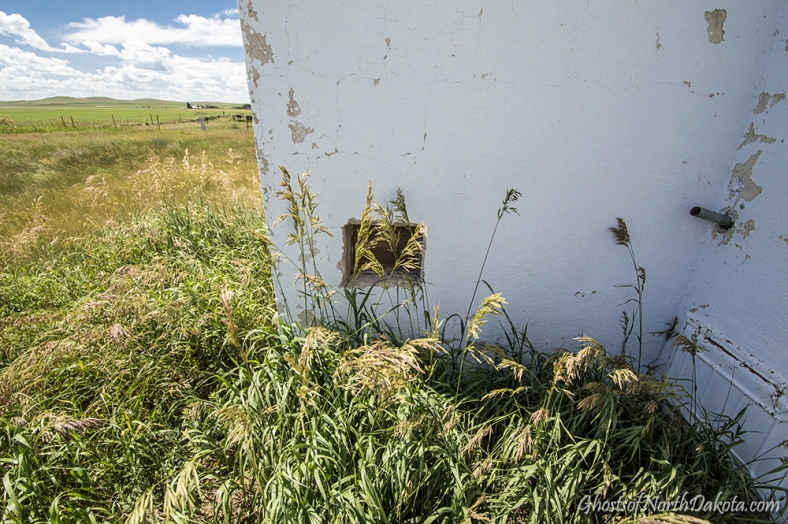 The cornerstone had been removed from the church. I mentioned it to Terry, and after we left, we spent some time discussing where it might have gone. It wasn’t until we got home and examined our photos that we realized it had been placed in the memorial that stood outside the fence of the cemetery, and neither of us had noticed it. I’m not sure why it was removed, but if I had to guess, I would say it’s because the cemetery might remain long after the church has crumbled? If someone knows for sure, please leave a comment. 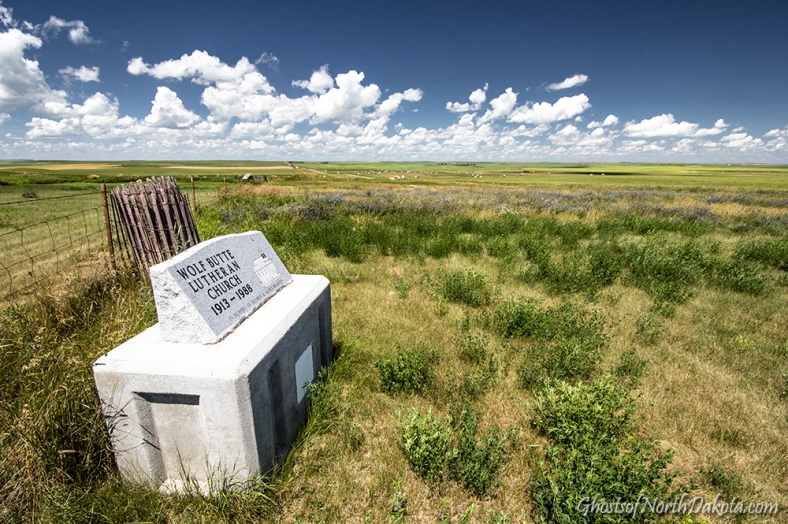 The church was locked up tight and nobody was around to get permission to go inside, so we settled for photos through the windows. 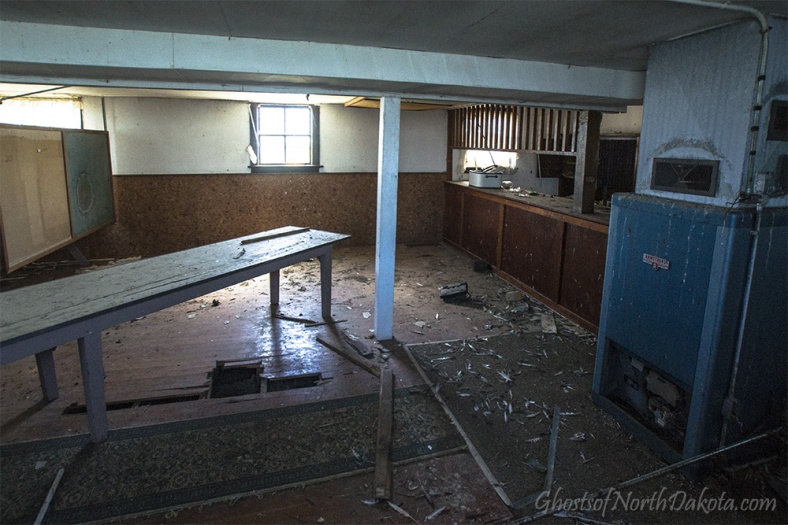 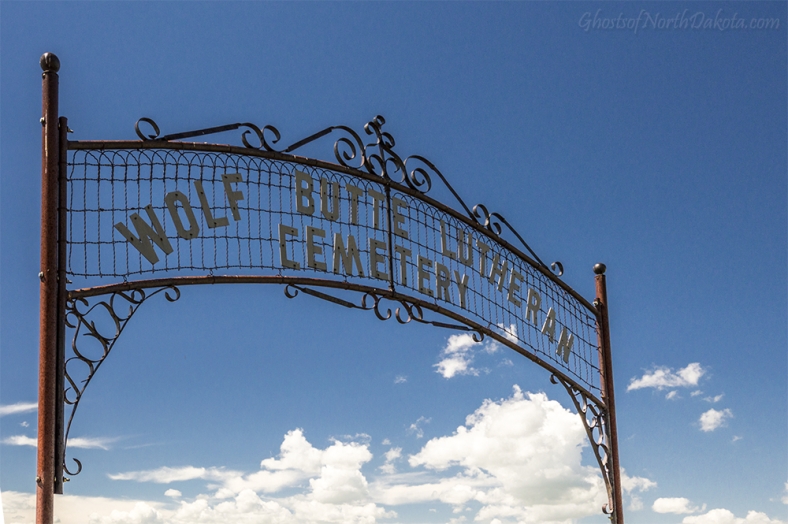 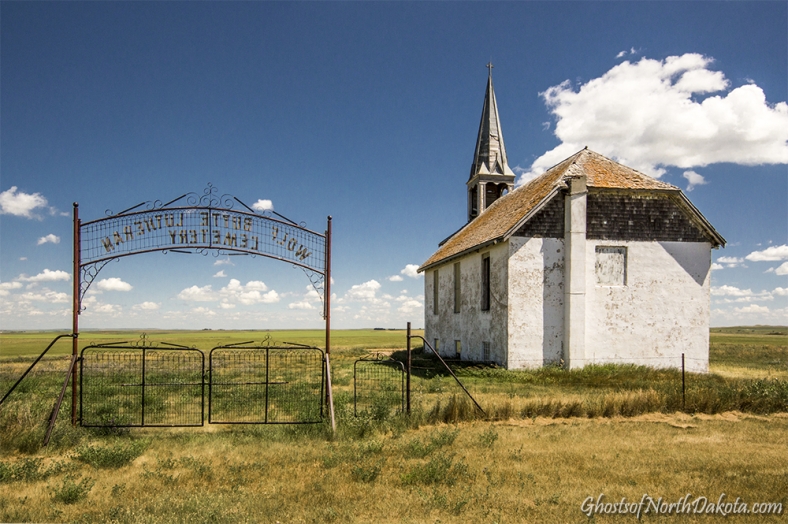 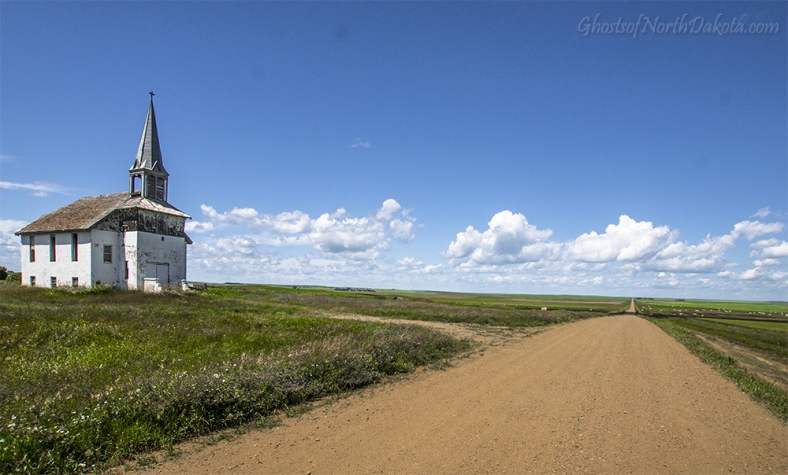 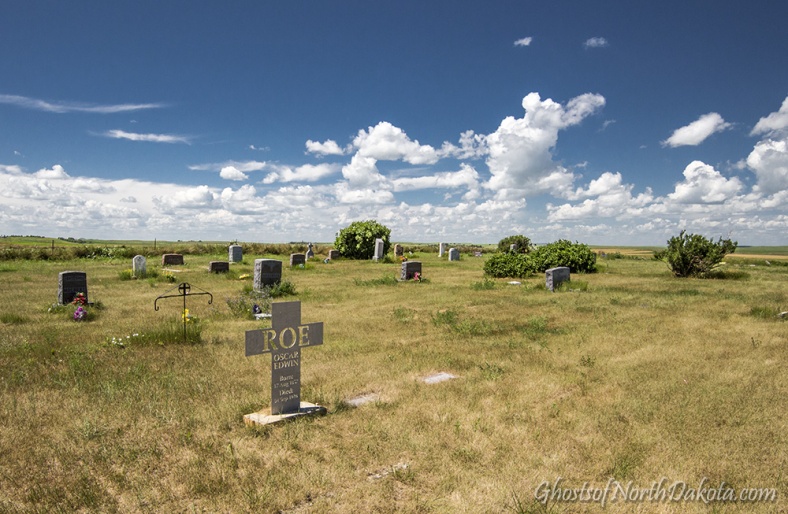 The headstone for Oscar Roe was replaced sometime recently with a marker made of sheet metal with cutout letters. It was quite unique, and I was impressed that someone had taken the effort and expense to give Mr. Roe, who was born nearly one hundred sixty years ago, a new, original marker. 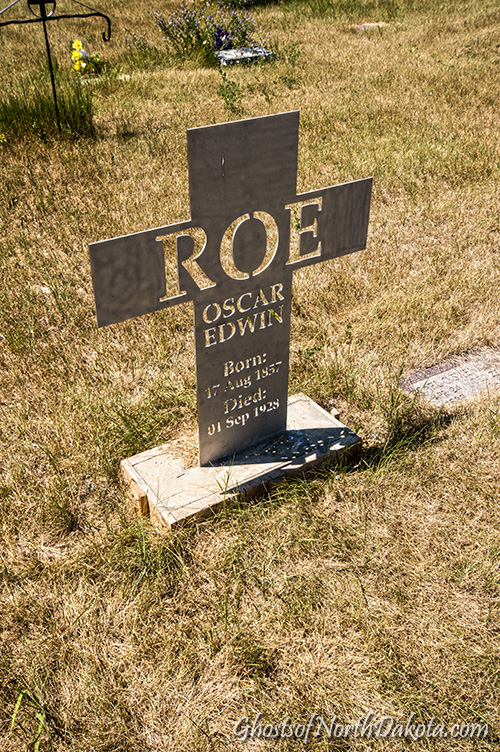 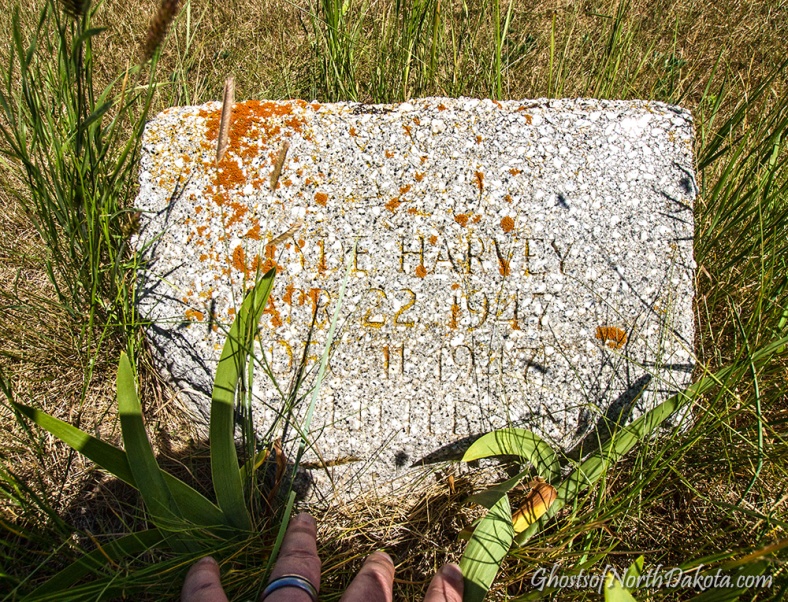 Terry photographed a small marker of a precious Harvey family baby, Clyde, who didn’t make it to his first birthday. 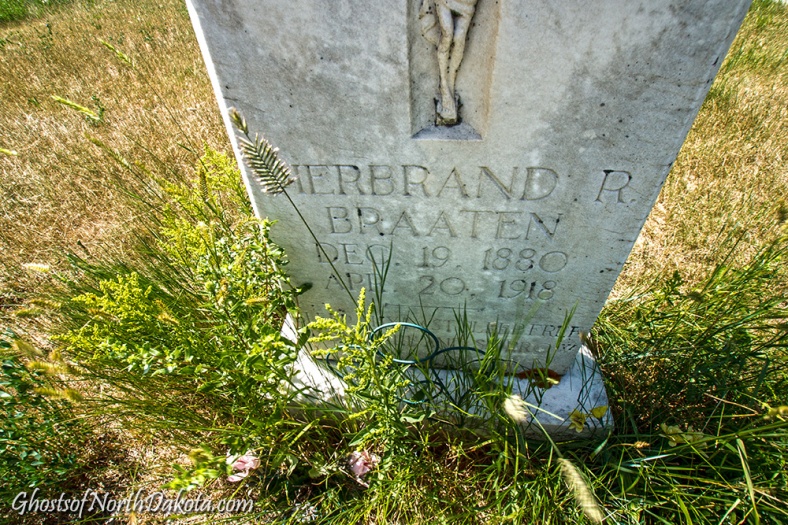 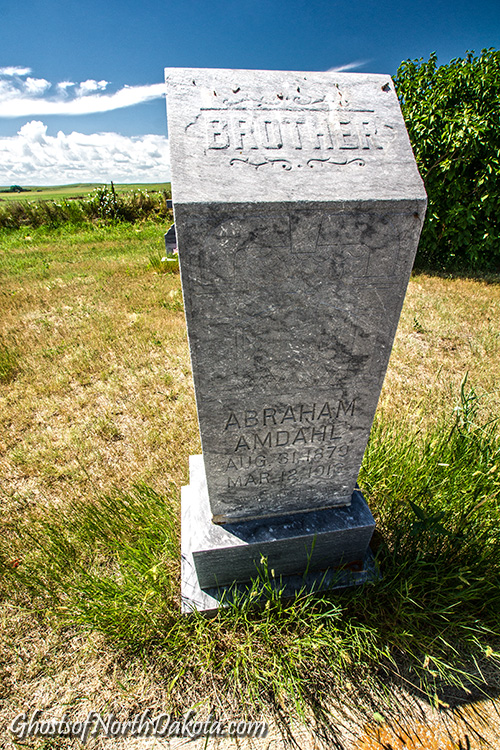 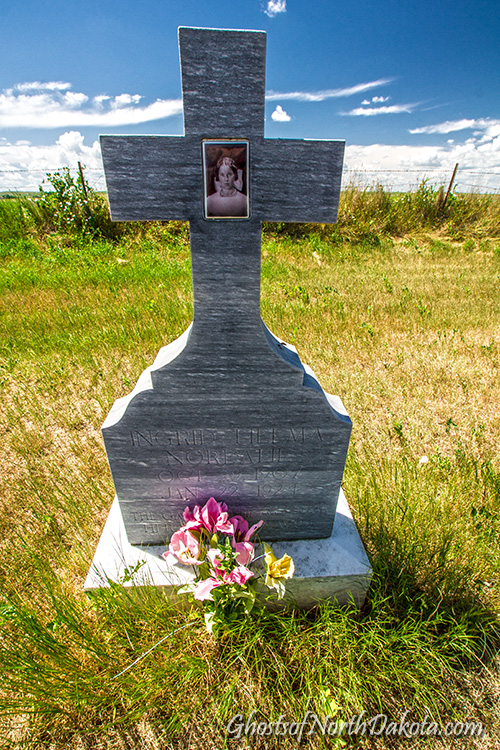 If you enjoy prairie churches, both active and abandoned, please check out our book, Churches of the High Plains. 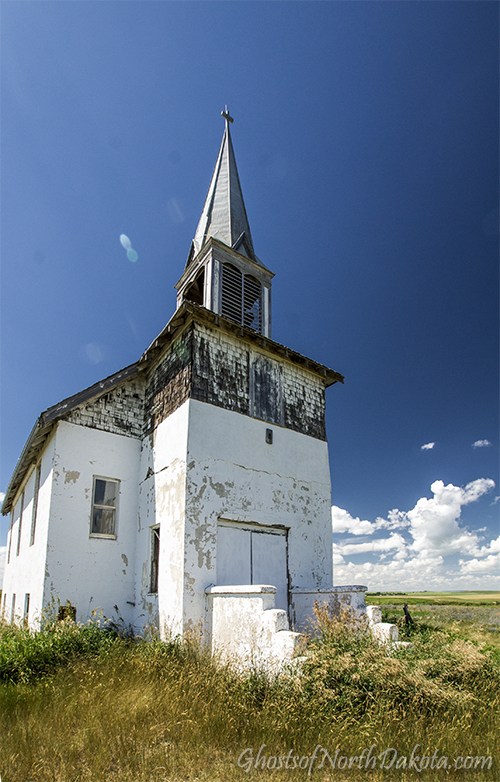