Hanks, North Dakota, in Williams County, about 33 miles northwest of Williston, is a lonely outpost on the prairie, just one resident away from being a ghost town.

Hanks was the subject of some national media in 2008 when National Geographic published The Emptied Prairie (available at the link only with a subscription) by Charles Bowden, a polarizing piece roundly denounced by many North Dakotans in letters to editors, in the Dickinson Press for example, or the Bismarck Tribune.

In the article, Bowden characterized a number of North Dakota communities, including Hanks, truthfully with respect to their shrinking populations, but in terms that many found depressing or disparaging.

Clay Jenkinson, as the the Theodore Roosevelt scholar-in-residence at Dickinson State University at the time, summed it up in the Bismarck Tribune in January 2008:

This is a fascinating, but also unsettling, time in North Dakota’s history. Pity that all Charles Bowden saw was decay, depopulation, despair and decline.

We’re going to be an urban people with a vast (and indeed empty) prairie landscape to play in. We’ll earn our living in cities and spend our leisure time out among the potholes and pronghorns, coyotes and coulees, buttes and badlands.

As I contemplate the future of North Dakota I feel considerable sadness, but I do not see decline.

In 2010, when oil was booming in the region, our artist friend John Piepkorn paid a visit to Hanks and found it sleepy as ever. John’s comments:

I took some of an abandoned house at the top of the hill, some of the cemetery which is north of town on a gravel road about 1/4 mile, some pics of what the lady described as the old bank (above) although it had a gas pump outside of it, and the interior looked like someone had used it as a house, and one other old house. 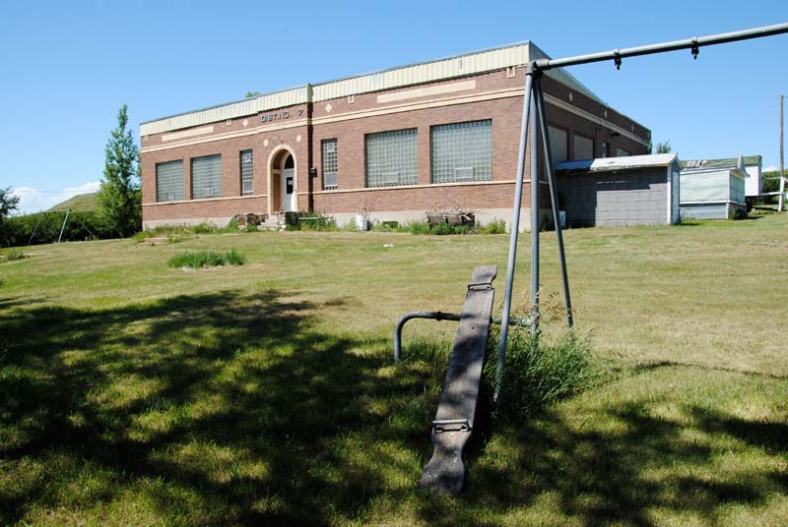 The old school is used as a museum now which is open only on Sunday afternoons.

The last remaining structure from another North Dakota ghost town, Bonetraill, is now located in Hanks too. You can see it in this Hanks post with photos submitted by Clif Nelson in 2012.

Do you know more about Hanks, North Dakota? Can you provide an update on things as they are today? Please leave a comment below.