North Dakota’s longest State Highway is Highway 200, and it stretches over 400 miles from the Red River near Halstad, Minnesota to the Montana border at Fairview. As we’ve been exploring North Dakota’s vanishing places since 2003, it’s a highway we’ve found ourselves on again and again, and we’re due to show appreciation for a road that will take you to so many amazing places.

END_OF_DOCUMENT_TOKEN_TO_BE_REPLACED

It occurred to me the other day that we’ve told the story about how Ghosts of North Dakota began in countless interviews over the years, but we’ve never posted it here, so for those who might be interested in how this project began, this is the tale.

In 2003, myself and Terry Hinnenkamp, my roadtrip friend and fellow adventurer, were working at the same Fargo Top 40 radio station, Y94. Halloween was coming up and we had this goofy idea that it would be neat to find an abandoned place and spend the night in it while recording our experiences for a program we would put together later, to air on Halloween — a kind of radio campfire story.

END_OF_DOCUMENT_TOKEN_TO_BE_REPLACED

We shot these photos of Sherbrooke Cemetery during a visit to the nearby ghost town and namesake, Sherbrooke, North Dakota, in Steele County in October of 2013.

END_OF_DOCUMENT_TOKEN_TO_BE_REPLACED

Sherbrooke, North Dakota is in Steele County and it is a true ghost town with no population.  Sherbrooke was the first totally abandoned town we ever visited back in 2003, at a time when we didn’t even have proper cameras — we just videotaped a walkthrough and then took screen capture photos.  A decade later, nature has continued unwaveringly to reclaim this place.

When we moved south of the main road through Sherbrooke, we realized we had not paid close enough attention to the ruins there when we visited a decade ago.  A large building once stood there, and today the field stone foundation remains with some intriguing artifacts within.  We’ll detail that in the captions below.

This old Studebaker with suicide doors sits in a field. 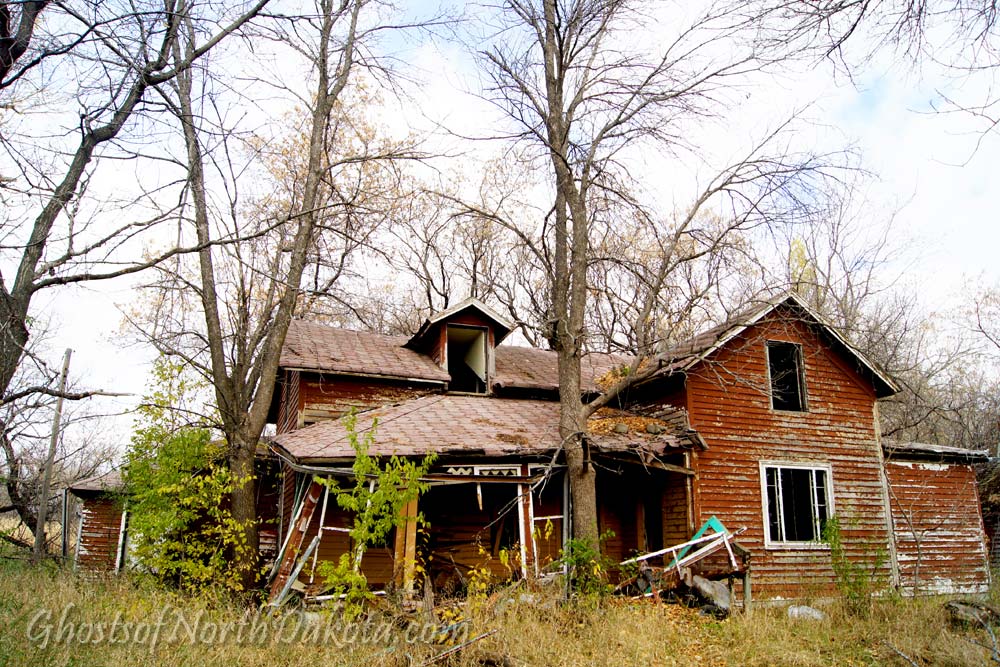 This is the former home of Arlene Carpenter and it was the last occupied home in Sherbrooke until it was abandoned sometime in the 1980s — EDIT: perhaps into the nineties (see comments below).

The front porch has collapsed. 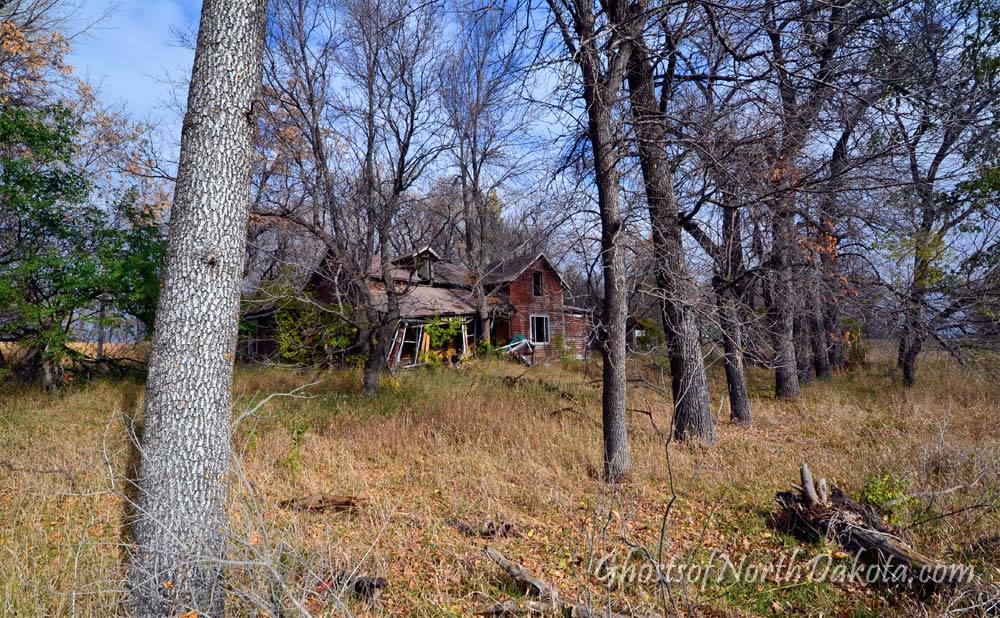 If you’ve looked at many of the galleries on this site, you know we occasionally give reminders on the real danger of walking around in abandoned townsites, and this is a prime example. This well is deep, and full of water — and it’s about a thirty foot drop before you hit the water. If you fell in this headfirst, you would drown before anybody could get you out.  Someone thoughtfully threw an old gate over the opening. 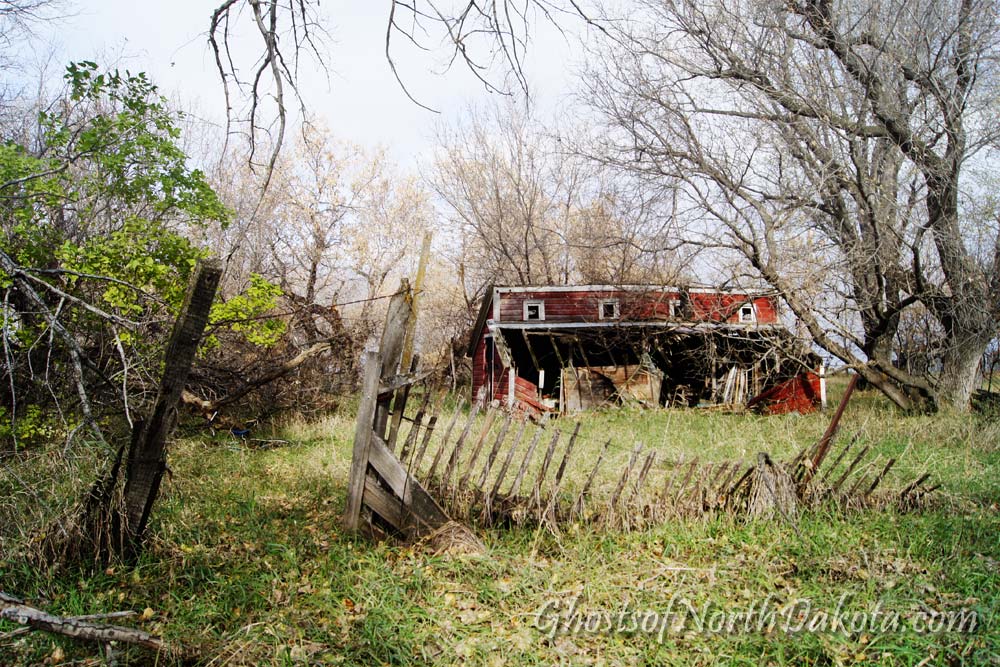 Someone broke a car window a long time ago. 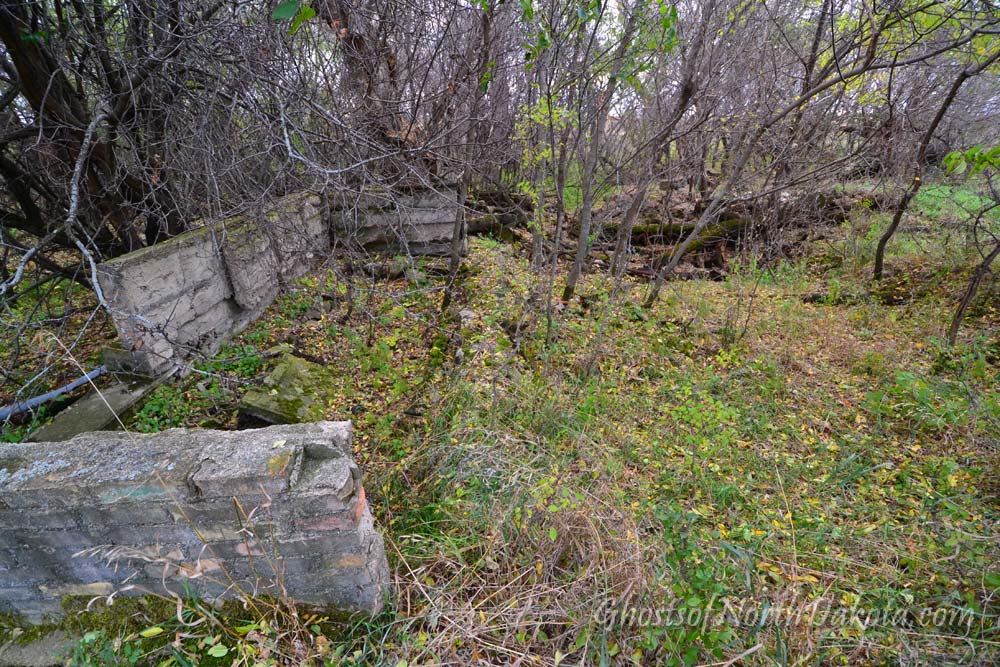 Sherbrooke was once the county seat of Steele County before having it snatched away by business people who saw fit to move the seat somewhere more significant — Sherbrooke had neither a railroad or a navigable river.  Sherbrooke’s residents fought it all the way to the North Dakota Supreme Court, but eventually lost, and the county seat was moved to Finley (also home to an abandoned Air Force Station). However, the ruins of this building on the south side of the road seem to be something of some importance, a building representative of a place that was once an important seat of government in the 1880s and 90s.

At first we wondered whether this may have been a courthouse.

It appears it was field stone on the bottom with brick on top. 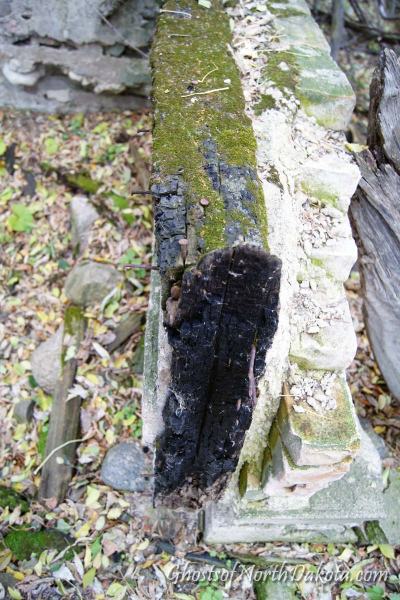 This one charred timber told us a fire was responsible for the demise of this place. 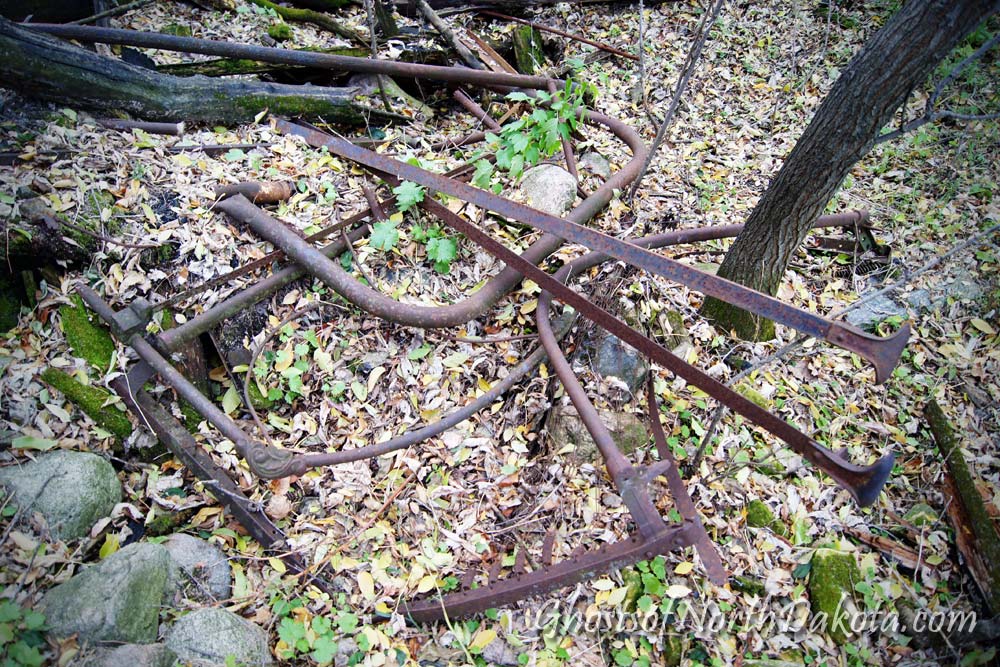 As we were walking around in these ruins, whoa, another open hole in the ground.  It looked like a sewer main that once served whatever structure was here.  One more hazard that could catch you off guard and cause you to break an ankle or tweak a knee.  If you choose this as a hobby, please be careful. 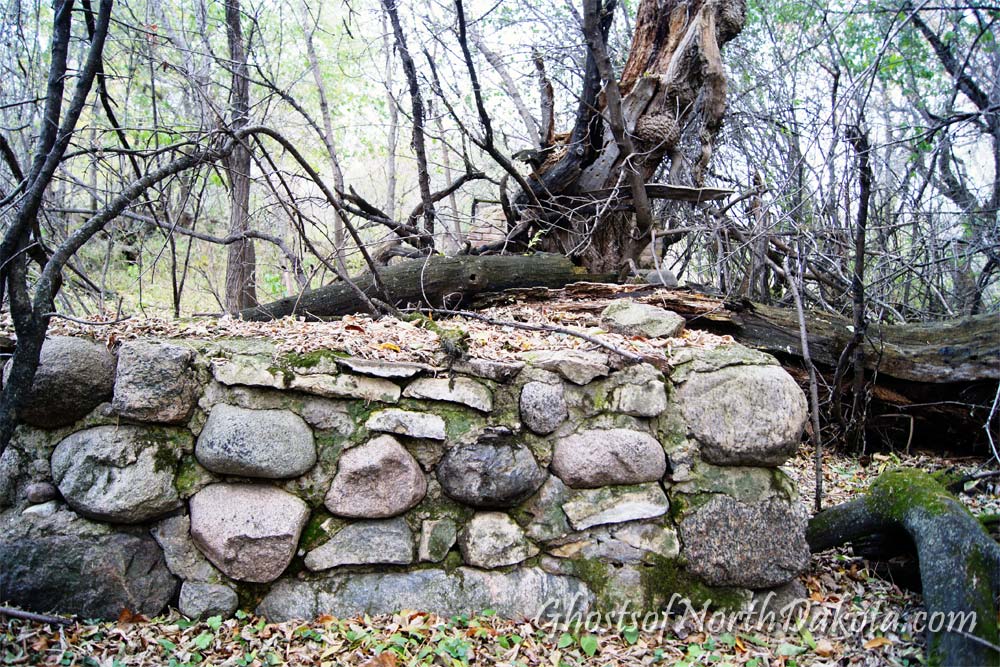 This pink home is the only other structure still standing in Sherbooke, and it might be the most completely overrun home of any we’ve seen. Trees and weeds and vines have completely covered and infiltrated this place.  We had to do some pretty extensive ducking of dense brush to get close enough for photos.

Exploring this lot in Sherbrooke is a little like a nightmare where you’re in a forest and the branches continually reach out for you, tugging at your clothes, threatening to sweep you away in an instant. The silence and remote location juxtaposed with images like the playhouse above with decorative curtains hanging in the window combine to create an eerie feeling in Sherbrooke.  Terry and I both felt it.

The floor inside the pink house is barely distinguishable from the ground outside.

In October of 2003, we visited Blabon, North Dakota, a tiny near-ghost town in Steele County with a handful of residents, and it was the first stop on what would become a ten-year exploration of North Dakota’s ghost towns and abandoned places.  In 2013, we returned to Blabon after ten years to snap some photos and reflect on one of the stories sent to us by a very early fan of our website.

Where there was once a small town with two grain elevators, a hotel, bank, bar, post office, and 900 residents, there are now only a handful of structures, a resident or three, and this lonely old collapsing home. Not even the train tracks remain. We’re not positive, but the home shown above appears to be the oldest, and perhaps the only remaining original structure in Blabon.  The roof has deteriorated considerably over the last decade.

We actually have been to Blabon twice before, the last time in 2004.  Since then, the home shown above has been offered for sale on Craigslist several times.  We’re not sure if it ever sold — it is in really poor condition.

Storm clouds on the horizon, as seen from the Blabon Cemetery. We noticed a fifth-wheel camper parked nearby which appeared to be lived-in and there appeared to be a little more life in Blabon than when we last visited.  We didn’t see anybody out and about, but it looks like Blabon might have gained a few residents.

Shortly after we founded the Ghosts of North Dakota website in early-2004, we received email from a gentleman in Norway named Øyvind Sætrevik whose great grandparents came to America around 1900 for a shot at the American dream.  In a series of emails (which have unfortunately been lost) he told us the story of his great grandparents losing a young child to illness, and eventually they gave up on their American endeavor and returned to Norway, leaving behind their child’s grave in Blabon as the only indication they ever came to America.

We searched the headstones in the cemetery for an obvious match to the circumstances, but nothing seemed obvious. If Mr. Sætrevik is reading this, please contact us. 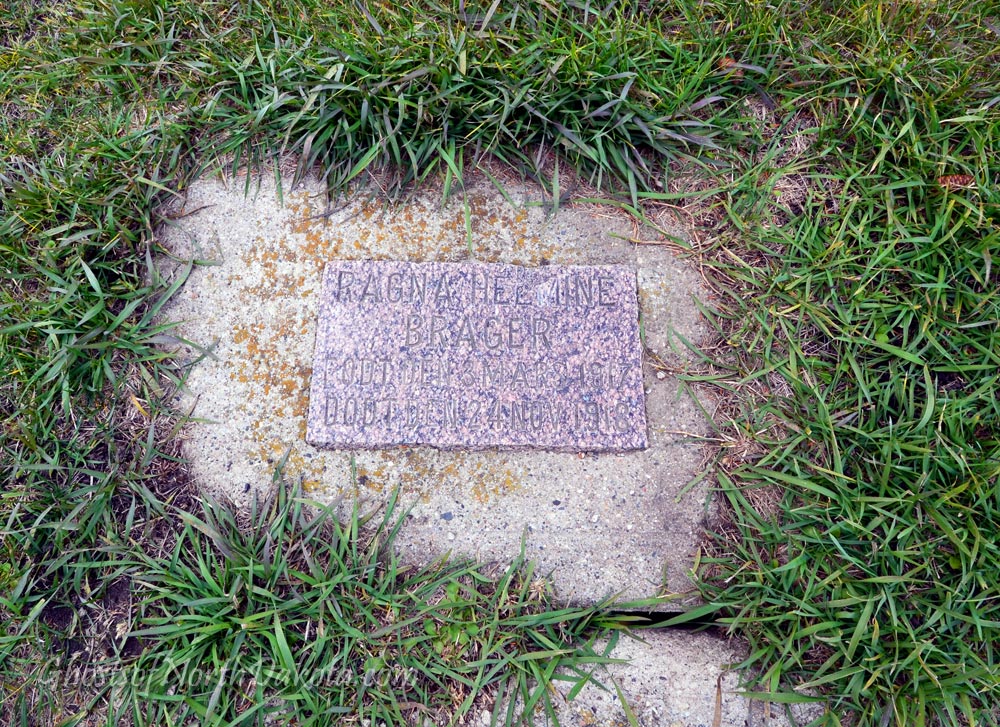 Finley Air Force Station is an abandoned radar base outside Finley, North Dakota.  Closed in 1979, the site now functions as a landfill.  Similar to the Minot and Fortuna Air Force Stations, Finley AFS was a ground control intercept facility tasked with detecting and dispatching intercept aircraft in the event unidentified aircraft threatened to penetrate American air space. The role of facilities like this evolved with the advent of the ICBM, but eventually North Dakota’s Air Force Stations were phased out. 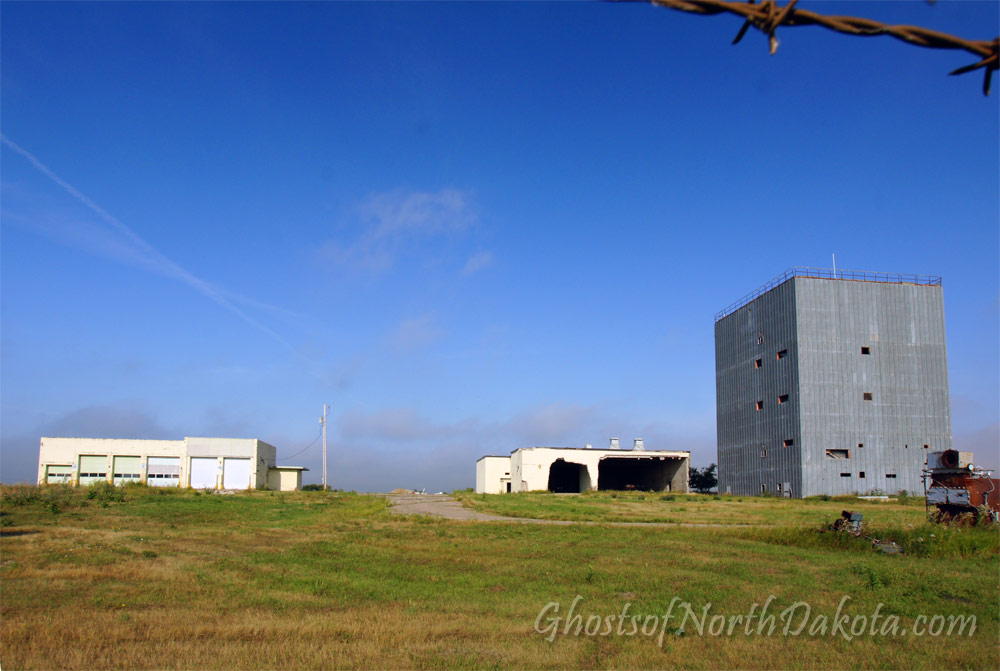 END_OF_DOCUMENT_TOKEN_TO_BE_REPLACED

Steele County
Inhabited as of 10/04

Blabon, ND is in Steele County, not far from another ghost town on this site, Sherbrooke, ND. Blabon is the first ghost town we ever investigated. It is presently inhabited by approximately 8 to 12 people. As many as three houses were clearly occupied and one trailer home had a satellite dish on the side.

Blabon was founded in 1896, named for Joseph Ward Blabon, a Great Northern Railroad official who visited the townsite in 1897.

We received an email from Norway that reads as follows:

Sending you some pictures of Blabon as it was about 1900. My great grandparents did own/run a grocery store/pool saloon. The moved back to Norway about 1915 i think. Nice site you’ve got here 🙂