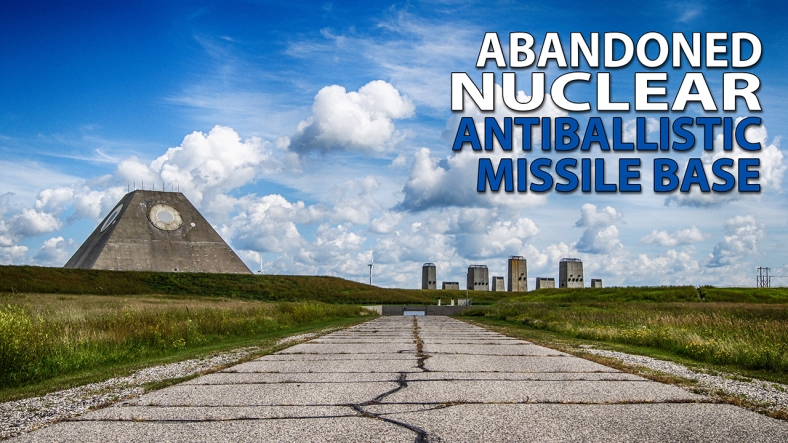 For almost half a century, from the end of World War II until the fall of the Soviet Union, our world existed on the precipice of nuclear annihilation. The threat of an instant and irreversible descent into nuclear war hung constant over our heads, the pendulum of power sometimes swinging our way and sometimes back toward the Soviets. It was this race for superiority that led to the creation of this place, the most advanced nuclear antiballistic missile facility ever built.

END_OF_DOCUMENT_TOKEN_TO_BE_REPLACED

Long before the Star Wars Missile Defense Shield was a thing, the US Government deployed a nuclear anti-ballistic missile system in Nekoma, North Dakota. It was the only operational facility of its kind. You can read more about it in our previous post, here.

END_OF_DOCUMENT_TOKEN_TO_BE_REPLACED

We got these photos of Nekoma, a town of about fifty in Cavalier County, in August of 2011. We stopped in to get photos of the nearby Stanley Mickelsen Safeguard Complex, and shot a bunch of stuff in town as well. These are some photos from our archive, never before posted. Enjoy.

END_OF_DOCUMENT_TOKEN_TO_BE_REPLACED

The Nekoma Safeguard Complex is a unique place in the history of the US military’s anti-ballistic missile effort.  A portion of the Wikipedia entry for this place:

The Stanley R. Mickelsen Safeguard complex in Nekoma, North Dakota, with the separate long-range detection radar located further north near the town of Cavalier, North Dakota, was the only operational anti-ballistic missile system ever deployed by the United States. It defended Minuteman ICBM missile silos near the Grand Forks AFB, North Dakota.

It had reinforced underground launchers for thirty Spartan and sixteen Sprint nuclear tipped missiles (an additional fifty or so Sprint missiles were deployed at four remote launch sites). The complex was deactivated during 1976 after being operational for less than four months, due to concerns over continuing an anti-missile-missile arms race, cost, effectiveness, and changing political rhetoric.

Originally there were to be three Safeguard facilities, with the other two near Whiteman Air Force Base in Missouri and Malmstrom Air Force Base in Montana. The 1972 Salt I Treaty changed things, however. The United States and the Soviet Union, under the terms of the treaty, were each allowed two anti-ballistic missile defense bases–one to protect the national capital, and one to defend an ICBM installation. As a result, Whiteman was canceled prior to construction, and Malmstrom was canceled with construction underway. Only the Nekoma ABM facility was completed, making it the most advanced nuclear antiballistic missile facility ever built.

The Stanley Mickelsen Safeguard Complex reached partial operational capability on the 1st of April, 1975. It received its full complement of warheads and became fully operational on the 1st of October, 1975. The next day, the House appropriations committee, frightened by the cost of the program and questioning its effectiveness in the face of Soviet MIRV technology, voted to pull funding for the base. The Senate concurred 48 days later, and the base was officially shut down on February 10th, 1976.

When we arrived, we were surprised to find the gate standing wide open. The flag was flying over one building, a white pickup was parked in a parking lot, and there was a light in one of the garages, so we decided to go in and see if we could find someone to talk to and get permission to shoot a few photos.

We walked around for a few minutes but nobody appeared to be around, so we shot some photos.

The closure of this base had a severe economic impact on the region. Active duty Air Force personnel were reassigned, but civilian workers were left out of work.

Unemployment in Cavalier County rose to 7.5 percent, and Pembina County, 8.6 percent. People who had flocked to surrounding communities for jobs left just as quickly. The population of Langdon dropped by 45%, Walhalla by 23%, Nekoma by 49%, Cavalier by 43%, and Mountain by 55%. Enrollment at Langdon-area schools fell by half. Businesses that depended on the boom failed in the bust. 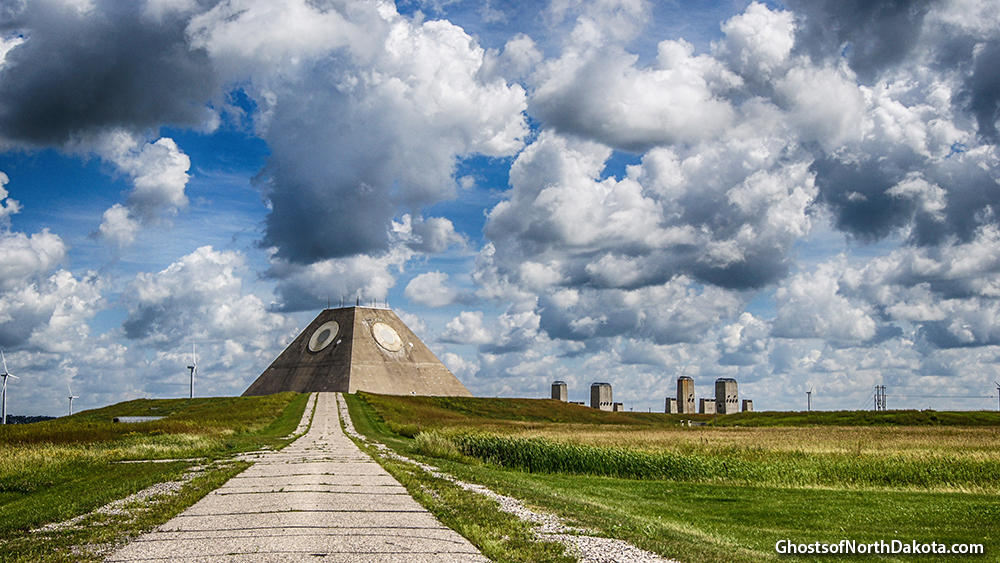 This feature is occasionally referred to as “Nixon’s Pyramid” 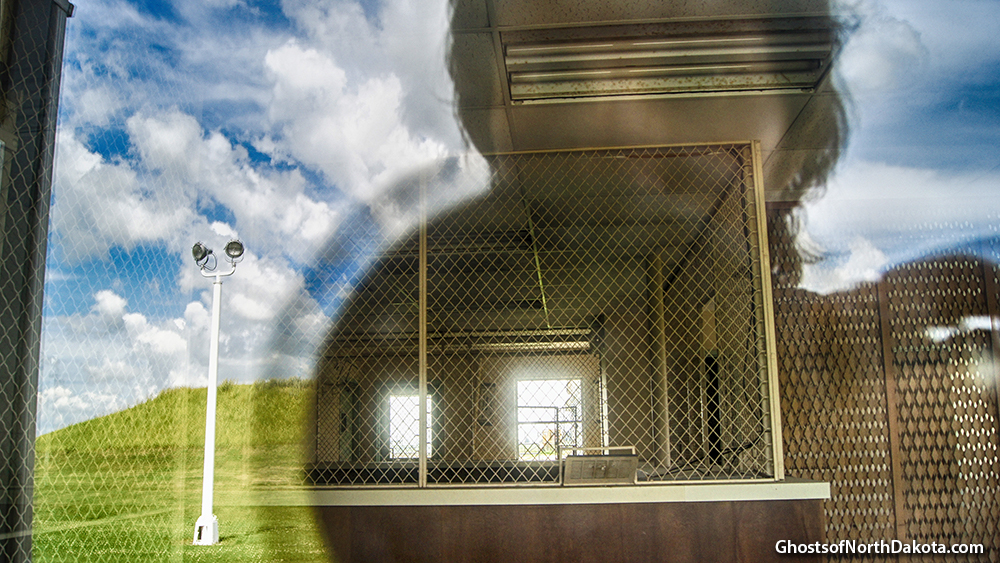 In short, nuclear missiles would have been launched from this facility to intercept and detonate incoming Soviet ICBMs. 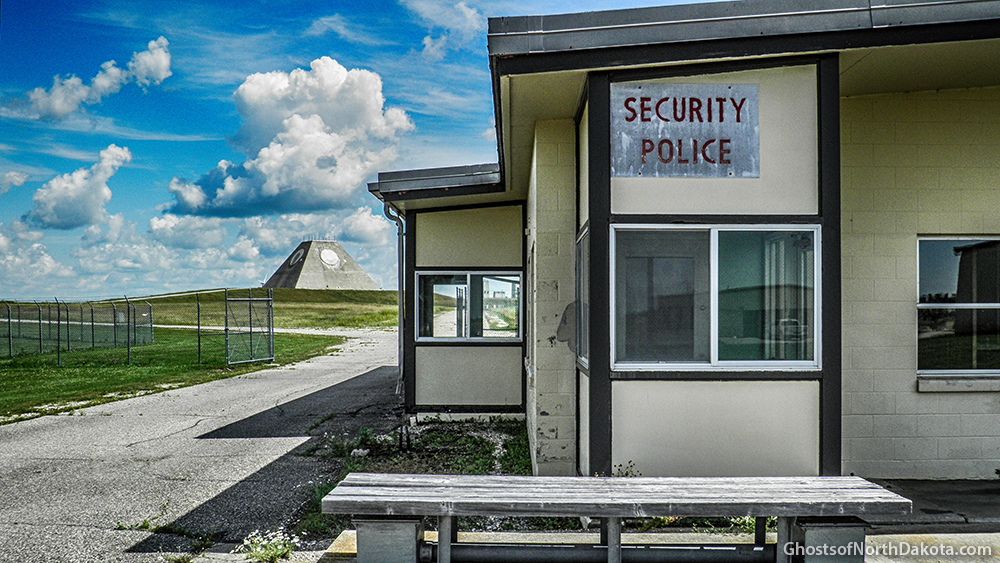 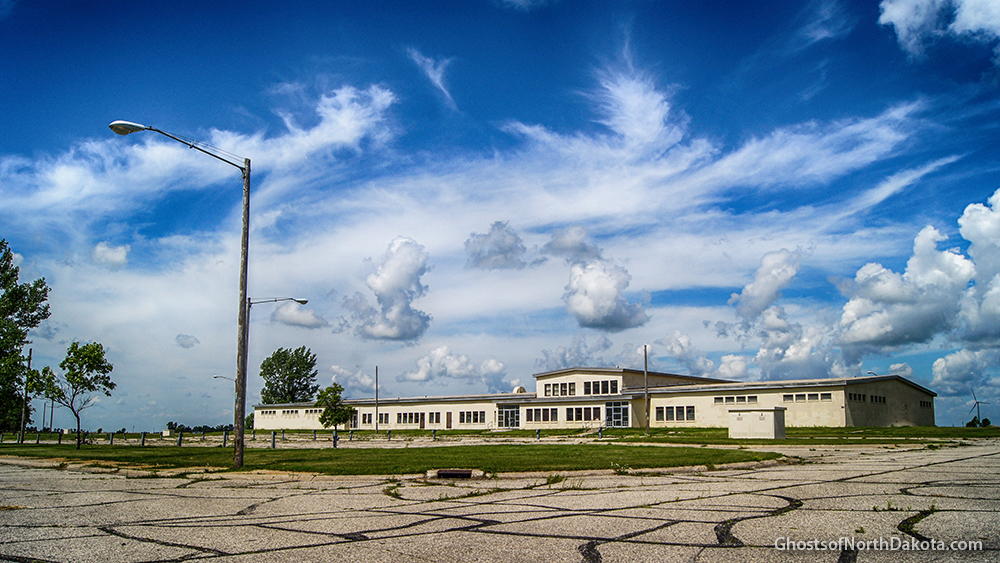 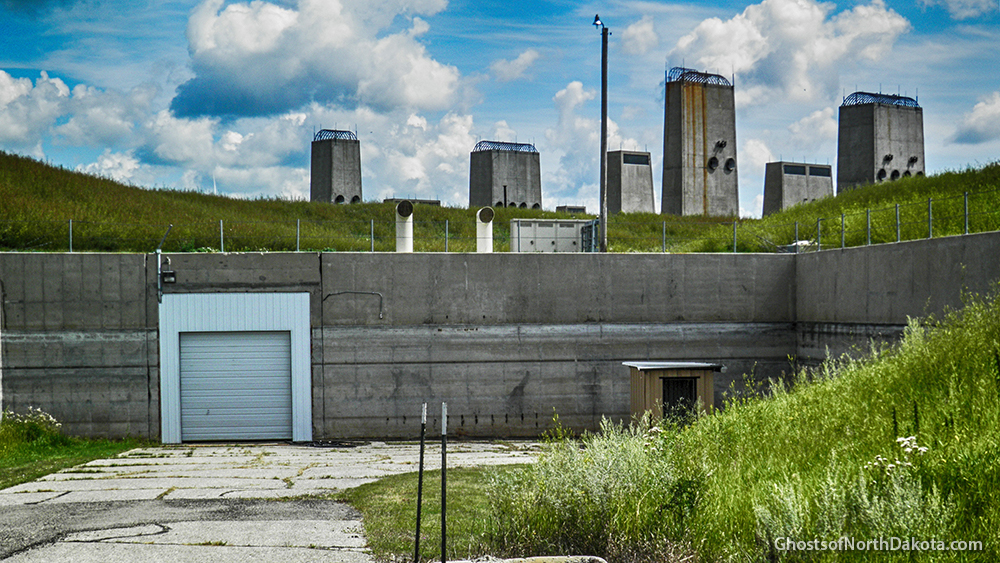 This anti-ballistic missile defense facility was linked to other remote facilities in the countryside around Grand Forks Air Force Base.  Terry’s dad took some photos of RSL #3 here if you’d like to see an example.

This facility was purchased by a local Hutterite farming operation, and they now farm the land all around the base. We’ve been told the local historical society has been trying to work out the details to turn this into a tourist attraction.

We took these photos not a moment too soon… after we had spent about forty-five minutes taking photos, an angry man in a black truck arrived and claimed we were trespassing. He threw us off the property, and as we left, we discovered we had we missed one ‘No Trespassing’ sign — it was posted on the gate, but because the gate was open, the sign was partially obscured by a fence post.  Apologies to the property owner.  We meant no harm.

Nekoma’s population was 50 in the 2010 Census, slightly more populous than most of the towns we photograph.  At the same time, there were a few cool abandoned structures and/or throwback reminders to simpler days… like the little orange gas pumps.  Since we were in the area to photograph the Safeguard Missile Complex, we decided to take a few shots in Nekoma.  It’s a fun town to photograph. 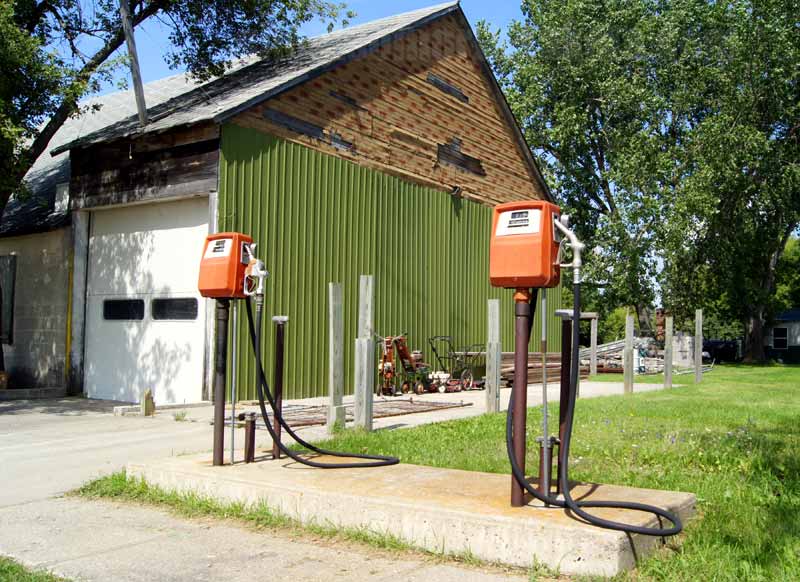 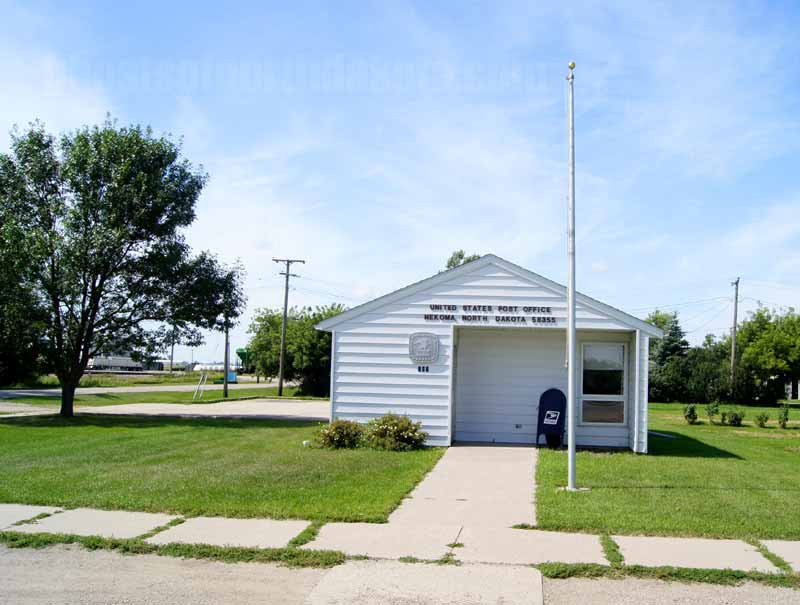 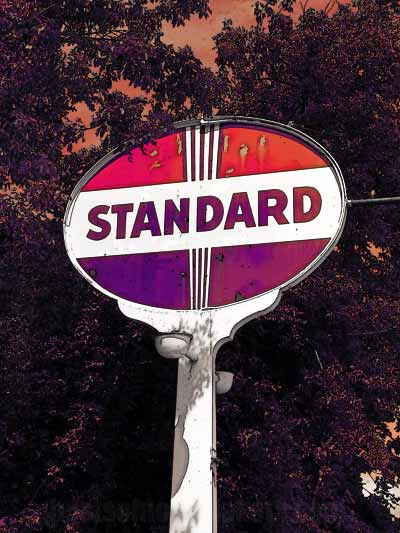 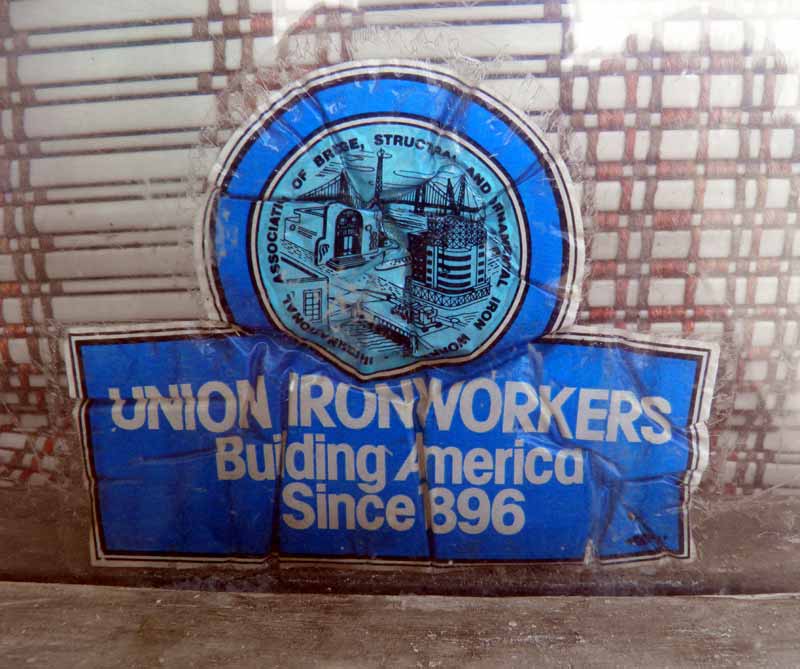 A sticker in the window of one of the local stores. 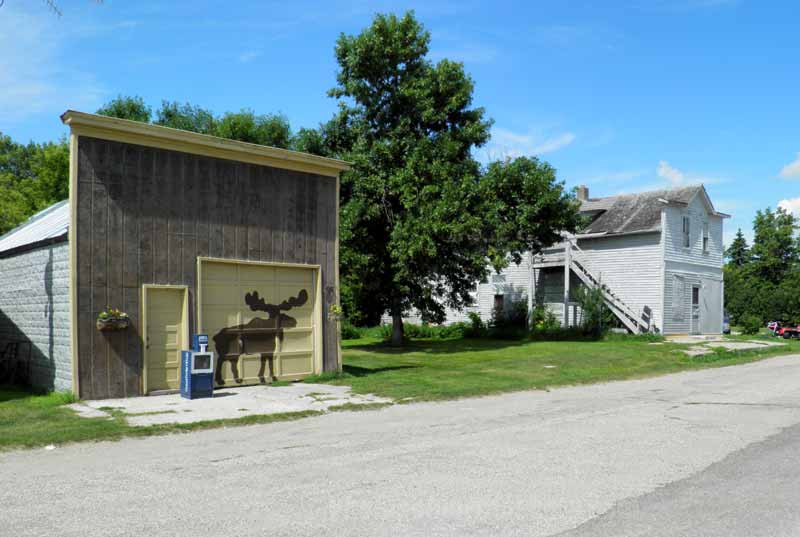